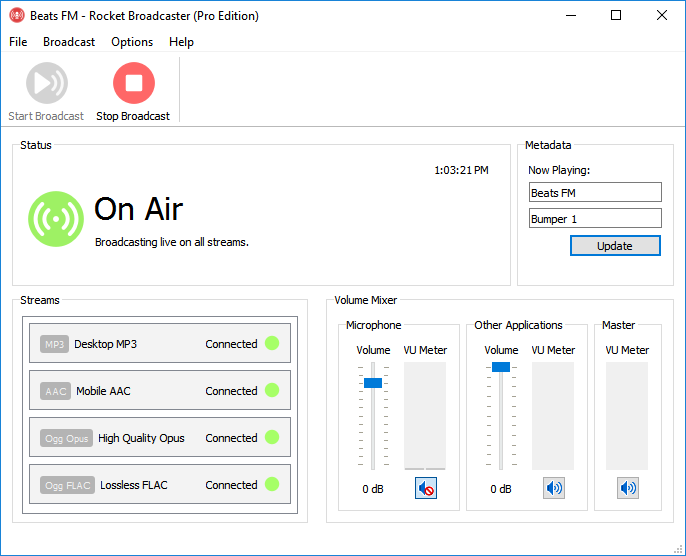 Broadcast all your audio

Rocket captures audio from other applications, including Skype, Spotify, and your automation software, so you can seamlessly mix live interviews with music.

Rocket Broadcaster can encode streaming audio as MP3, AAC, AAC+, Ogg Vorbis, Ogg Opus, and Ogg FLAC (lossless). Rocket is bundled with encoder templates for common configurations, but also allows you to customize the encoder settings. Bitrates ranging from 16 to 320 kbps are supported.

Find out more about Rocket Broadcaster.

How do I connect to my radio station?

Please visit our Rocket Broadcaster knowledge base for guides on how to connect to various services.

Minor software upgrades are provided for free. Major updates are free within the first 6 months of your purchase.

Upgrading is always optional: If/when we release a major new version of Rocket Broadcaster Pro, your are not required to upgrade and your license to your old version will continue to work.

How long is a Rocket Broadcaster Pro license valid for?

If you purchase Rocket Broadcaster Pro, your license is a perpetual, non-expiring license. That means you do not have to renew your license and there are no recurring charges. You only need to buy it once and it will work forever.

How many PCs can I install this on?

If you wish to install the software on multiple PCs, please purchase additional seats during checkout, or contact support and we can assist you.

Your backup PC must be configured to stream the same audio as your primary PC to qualify as a backup PC.

We offer a 30-day money back guarantee on all software purchased through our store. If our products don't work with your computer or you're not fully satisfied, we'll refund your full purchase price. This allows anyone to try the full version of our products risk-free.

Refunds cannot be issued after 30 days of purchase.

Please note: Our refund policy only applies to products purchased directly through our websites, including:

If purchasing through a 3rd party reseller, you are subject to the return policy of that vendor.

Which payment methods do you accept?

We accept PayPal and major credit cards including Visa, Mastercard, and American Express.

Additional payment methods may be available in certain regions. To see the options available for you, proceed to the "Pay with Credit Card" page during checkout.

How does digital delivery work?

Though most registration emails are instant, if you do not receive your key within 24 hours, please contact support.

Can I install this on more than one computer?

Each Oscillicious software application* or plugin can be installed on up to 2 computers (PC or Mac), as long as it is only used on one at a time. For example, if you have a studio PC and a MacBook for the road, you may install the software on both.

If you'd like to install the software on more computers, we ask that you please purchase another copy. Each additional licensed purchase allows you to install it on another 2 computers and adds another user.

For classroom licensing and other installations with many computers, please contact sales@oscillicious.com for bulk licensing details.